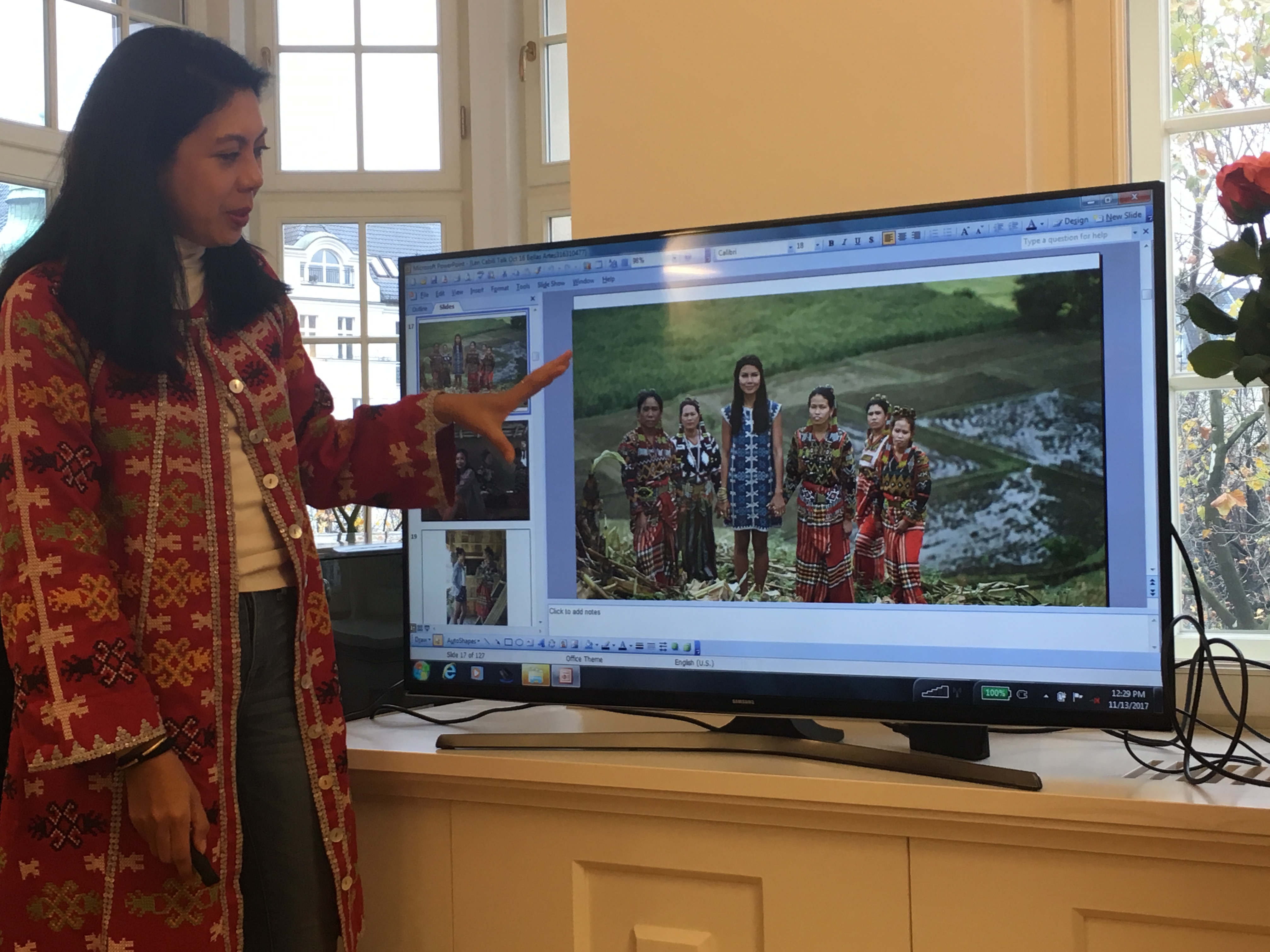 As part of its Gender and Development (GAD) program and its advocacy of Philippine design and social enterprise, the Philippine Embassy in Berlin hosted on 13 November a conversation with Filip+Inna founder Lenora Luisa Cabili under its Coffee with Creatives series. Filip+Inna is a decade-old homegrown fashion brand that works with indigenous groups in the archipelago by creating contemporary clothing and accessories that use their traditional embroidery, weaving, and beadwork.

Ms. Cabili shared the brand’s journey with the more than twenty, mostly women guests who attended the talk. Ms. Cabili noted that the brand has deep roots in Mindanao, with her mother hailing from Basilan. Her mother also danced with the Bayanihan dance company, further deepening her and her siblings’ appreciation for Philippine culture. Later, she would also join the dance company herself.

Ms. Cabili also narrated her adventures searching for and working with artisans in far-flung places. Currently, the brand works with up to twenty indigenous groups, and Ms. Cabili has five more groups she plans to work with in the near future. Asked if she was open to working with more groups, Ms. Cabili laughed. “I’ve lost count of how many times I’ve said enough, we’ve got a good number, only to be unable to say no when I’m approached by new groups wanting to partner.” 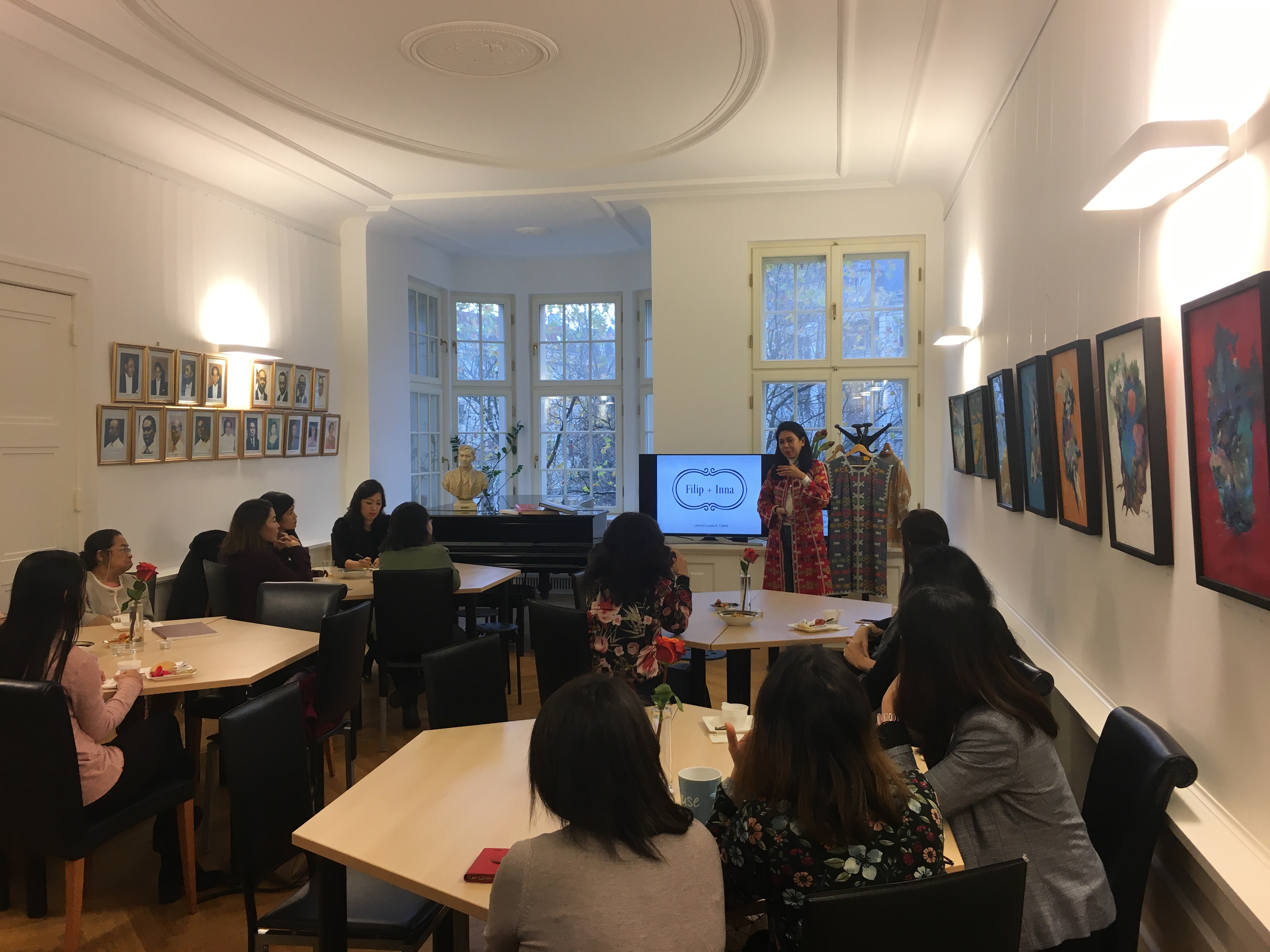 Most of Filip+Inna’s artisans are women, who have been able to make a living from their traditional skills into a good livelihood with the help of the brand. Not only does Ms. Cabili ensure that they are paid well—the artisans are often paid on a per-stitch basis, she also gives them significant leeway to use their skills and creativity. Usually, she simply provides them with the materials, such as threads and fabric, and gives them free rein to use their imagination in doing their embroidery and stitchwork.

One of the guests asked if Filip+Inna would be open to adjusting the design of its products to cater to German tastes, which tend to be more muted and subdued than Filipino preferences. “You’ve anticipated our design thrust for next year,” Ms. Cabili replied. “In Filip+Inna’s early years, we used a lot of embroidery because we wanted to make a mark. Now that we’ve done that, we’re open to exploring new design directions.”

Filip+Inna founder Lenora Luisa Cabili shared the brand´s journey with more than twenty guests who attended the talk at the Philippine Embassy.

Filip+Inna is at the vanguard of a growing movement of social enterprises in the Philippines that are reviving indigenous and artisanal traditions. Earlier this year, the Philippine Embassy in Berlin also invited Ms. Rosal Lim of Rurungan sa Tubod Foundation to talk about their venture’s efforts to equip and employ women from poor fishing communities in Palawan with pina weaving skills and technology. END