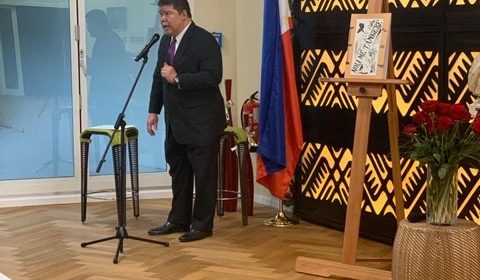 The Philippine Embassy in Berlin, with members of the Filipino Community, commemorated the 123rd anniversary of the Martyrdom of Dr. Jose P. Rizal during a program held on 27 December 2019 at the Embassy’s Sentro Rizal. Philippine Ambassador to Germany Theresa Dizon-De Vega, a member of the Ladies for Rizal,  in her remarks thanked guests who came and participated in the floral offering ceremony. She likewise noted that City of Berlin and Germany which Rizal referred to as his “scientific ... END_OF_DOCUMENT_TOKEN_TO_BE_REPLACED

Berlin-based media personalities, bloggers, and some of the city’s top food critics received a special introduction to Filipino cuisine through a Christmas dinner hosted by the Philippine Embassy last December 10, at the Waldorf Astoria Hotel. The four-course dinner, prepared by Filipino culinary expert Maite Hontiveros-Dittke, consisted of appetizers and entrées that represented Filipino cuisine’s main flavor profile – sweet, salty, and sour. In her remarks during the event, Philippine ... END_OF_DOCUMENT_TOKEN_TO_BE_REPLACED

Berliners got a taste of Filipino food this Christmas through the Philippine Embassy stand at the Weihnachtsrodeo Christmas Bazaar, held from December 7 to 8, in Berlin’s trendy Kreuzberg District. With its participation, the Embassy and its partners put on display food products that are not only of good quality, but also sustainably-produced. Health-conscious and eco-friendly Berliners took their pick from a wide-variety of products on offer, such as black and red rice, coconut vinegar and ... END_OF_DOCUMENT_TOKEN_TO_BE_REPLACED

An international crowd of over 200 people shared a night of music at Filipino singer Armi Millare’s concert in Berlin last November 16. Dubbed “The Last of Autumn,” the special event at Prachtwerk Berlin featured several solo performances by Armi, lead singer of popular Filipino band UDD (formerly Up Dharma Down). Filipino fans from Germany, Czech Republic, and even as far away as Malta, led their friends from Germany and other countries in signing UDD hits like “Tadhana” (destiny) and “Oo” ... END_OF_DOCUMENT_TOKEN_TO_BE_REPLACED 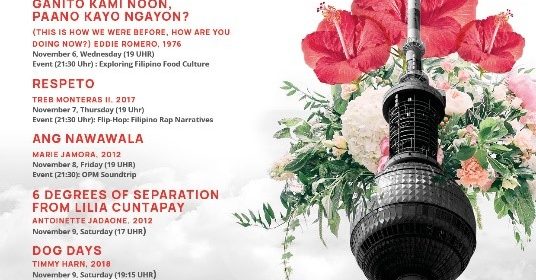