The Philippine Embassy in Berlin today hosted 27 representatives of Executive and Legislative government agencies in the Philippines who are in Berlin for the International Training on Intrapreneurship and Competitiveness at The DO School from 13 to 17 January 2020.

Arranged by the Development Academy of the Philippines (DAP), as the PH’s national productivity organization, with the support of the Office of Deputy Speaker of the House of Representatives Loren Legarda, the training seeks to enable the delegates to pursue and develop innovative products and services, and creative solutions to strengthen the competitiveness of MSMEs in light of Industry 4.0. 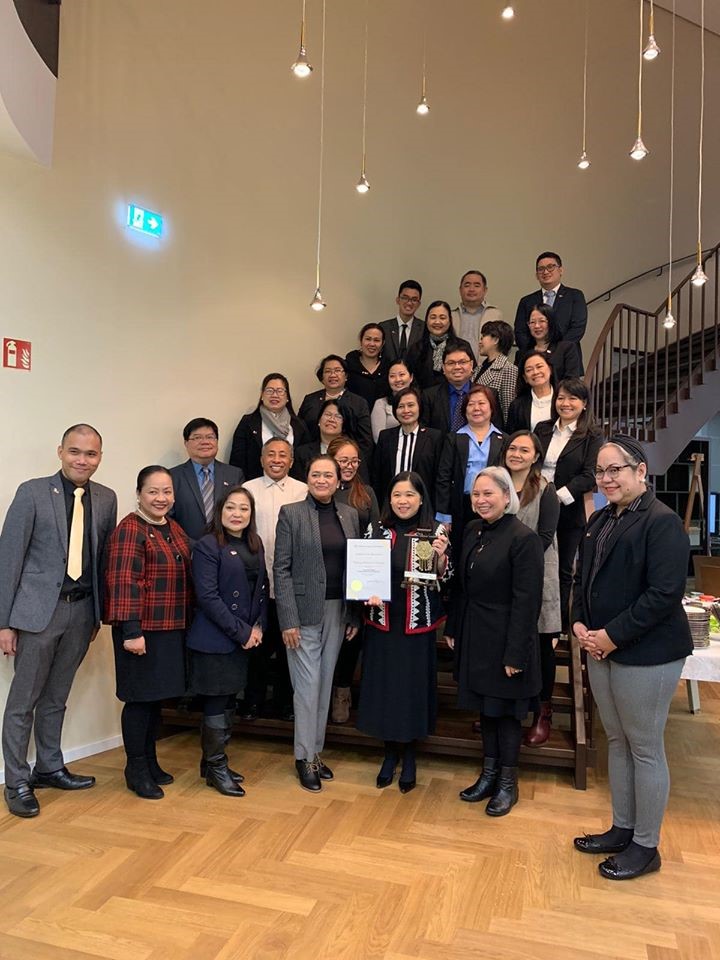 Ambassador Dizon-De Vega receives a certificate
and token of gratitude from the delegation.

Before the briefing, the delegation joined the Embassy’s personnel in the flag-raising ceremony traditionally held on Monday mornings to open the work week. Ambassador Theresa Dizon-De Vega then opened the briefing with her welcome remarks, wherein she highlighted the abundant opportunities for learning best practices and skills upgrading offered by Germany. She noted the German Government’s game-changing efforts to focus economic policy including in the MSMEs Sector on three areas: Innovation, Sustainability, and Digitization.

DTI Undersecretary Blesila Lantayona, as mission leader of the delegation, thanked the Embassy for the briefing and enjoined the delegates to work together as a team for the sake of their clients and beneficiaries. DAP Senior Vice President Magdalena L. Mendoza then gave a brief background of how the training program came about, noting the novelty of the idea of “intrapreneurship” in the PH public sector, followed by Mr Phillip Tettenborn, Director for Impact Entrepreneurship at The Do School, who gave an overview of the institution’s objectives and expressed eagerness in working with the delegation in the coming days. 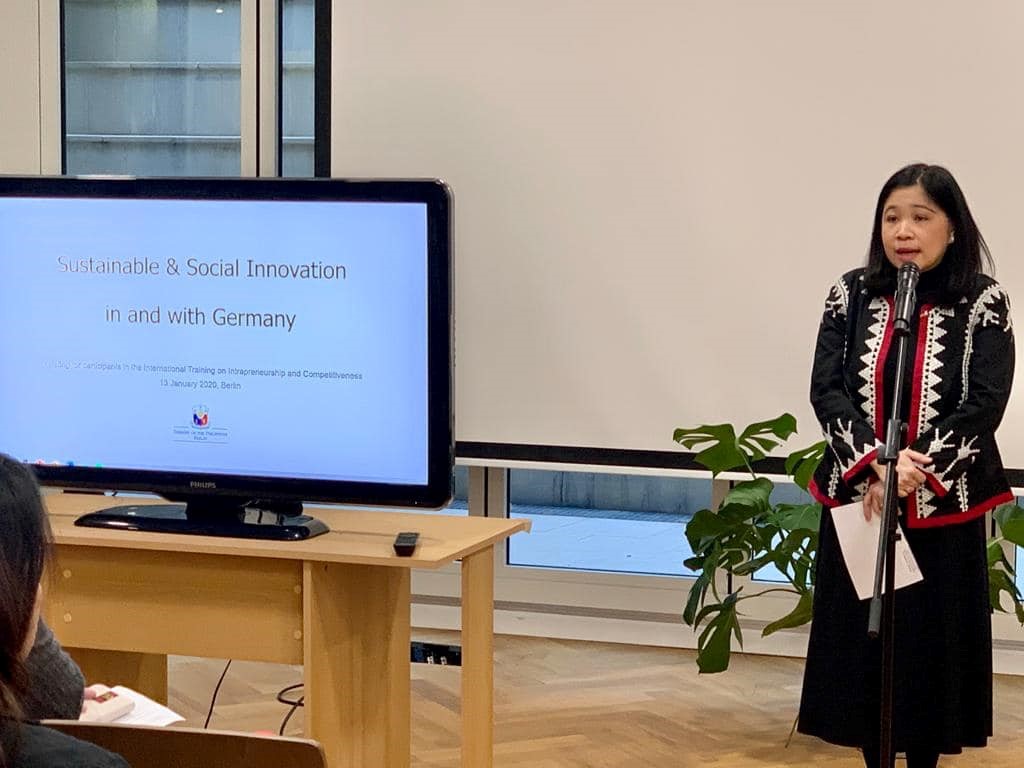 Ambassador Dizon-De Vega welcomes the delegation and tells them
about relevant developments in Germany with regard to MSMEs and innovation.

The welcome and opening remarks were followed by presentations to orient the delegates on developments and opportunities in Germany. Post’s Economic Officer Catherine Torres talked about Sustainabililty and Social Innovation in Germany, focusing on Germany’s efforts to gradually wean its export economy from carbon-dependence and to move toward cleaner and greener alternatives, especially in the areas of Agriculture, Energy, Mobility, and Fashion.

Commercial Counselor Althea Antonio then gave a presentation on the priorities and programs of the Philippine Trade and Investment Center (PTIC) in Berlin, including programs specifically geared at MSMEs. Among others, she talked about Philippine participation in major trade fairs and exhibitions in Germany, such as Ambiente, Biofach, Anuga, and Electronica, and the launch in 2019 of the Trabaho Negosyo Kabuhayan program in Germany as a joint project of PTIC-Berlin with the Embassy and POLO-Berlin.