On 24 March 2020, a day after restrictions on gatherings and contact with people outside of one’s household were implemented across Germany and people encouraged to stay at home in light of the COVID-19 pandemic, the Philippine Embassy in Berlin launched its Bahaynihan initiative to support its community in coping and thriving amid the quarantine. 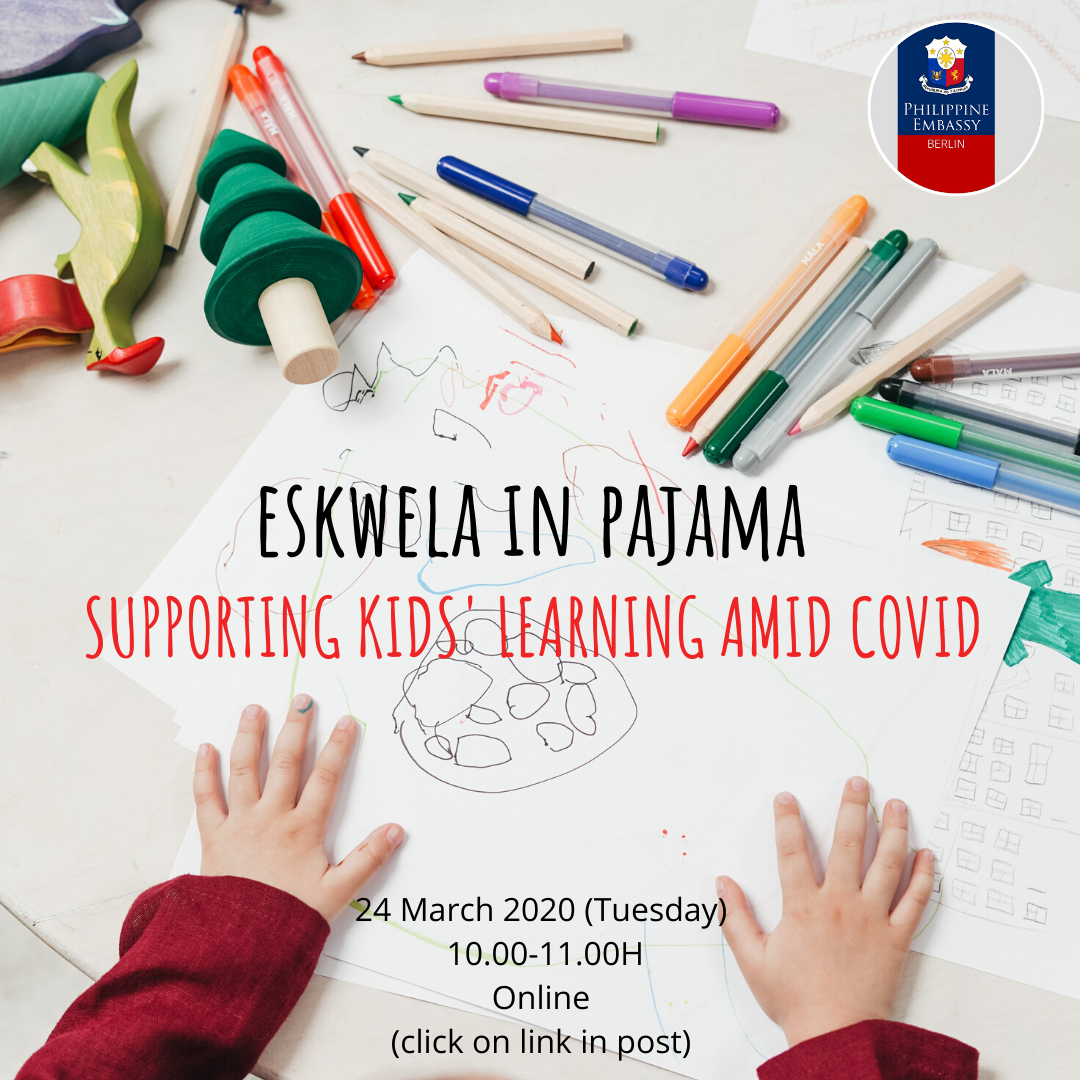 Delivered online via the Zoom platform, a total of seven (7) sessions were offered on a range of topics by resource persons from the Filipino-German community. The sessions were likewise recorded and the videos uploaded to the Embassy’s Facebook page for the benefit of those unable to join the live session.

The inaugural session was entitled “Eskwela in Pajama: Supporting Kids’ Learning” amid COVID, and featured Ms Lynda Millares-Sylvester, a veteran educator who presently teaches at the Nelson Mandela School of Berlin. Teacher Lea, as she is fondly called by students as well as fellow community members, shared tips to help parents create a more effective learning environment and experience for children at home. The tips, drawn from her teaching experience as well as from raising two young kids, included packing a snack box so kids don’t snack constantly throughout the day, following a routine that includes 2-3 subjects per day based on their regular school schedule, and not forgetting music and sports. 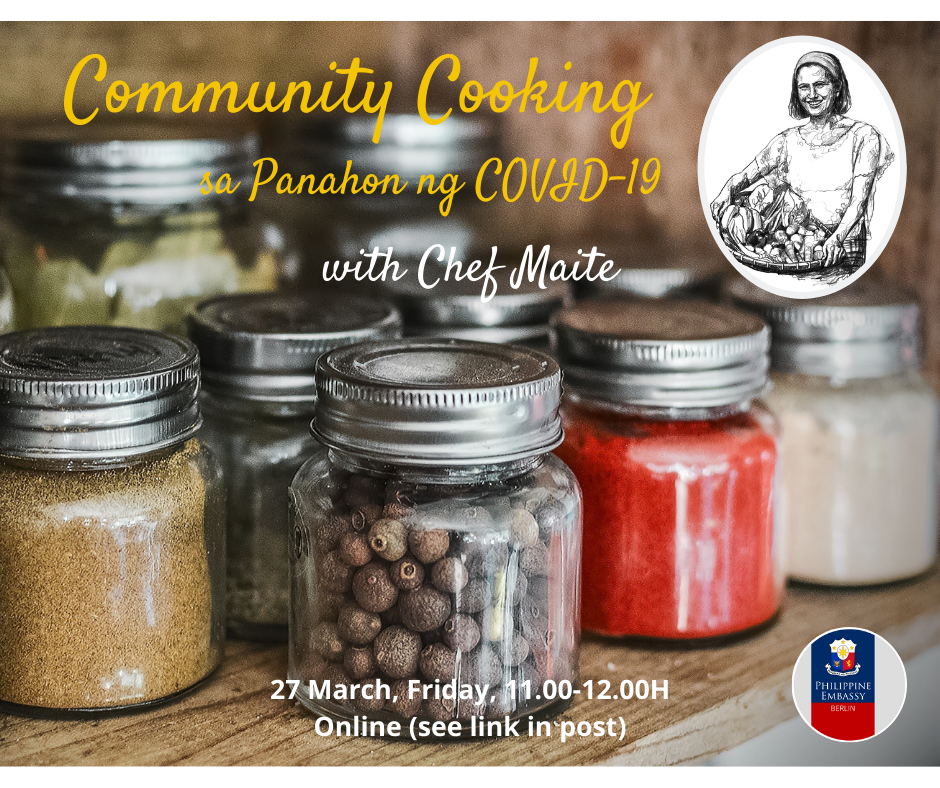 Next up was “Community Cooking sa Panahon ng COVID-19,” in which Düsseldorf-based and Filipino food advocate Maite Hontiveros-Dittke did a live demonstration of preparing Arroz ala Cubana. Afterwards, Chef Maite, as she is known in the community, gave tips on what to do with the leftovers especially since the COVID-19 restrictions can make it harder for people to do the grocery regularly, while also emphasizing the importance of avoiding food waste. 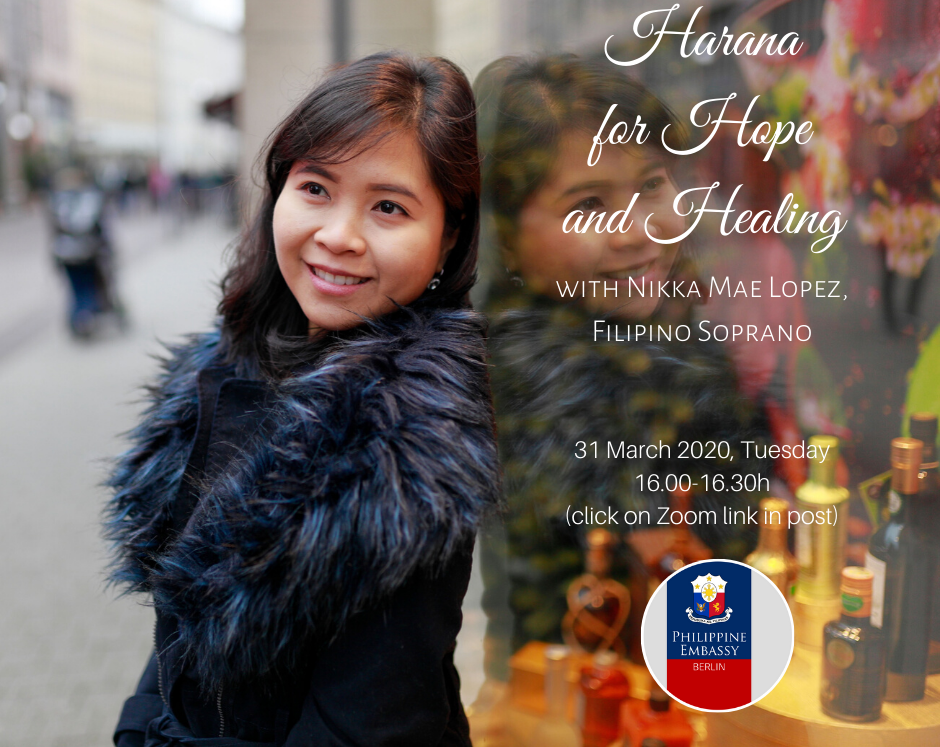 The third offering was an online mini-concert by Filipino soprano Nikka Mae Lopez dubbed “Harana for Hope and Healing.” Based in Karlsruhe, where she studied Art Song Design at the Hochschule für Musik as a DAAD scholar after doing her undergraduate at the University of the Philippines Conservatory of Music, Nikka serenaded her Zoom audience from the stage of her apartment living room with six songs, including, among others, Sa Kabukiran, Leron Leron Sinta, Schubert’s Ave Maria, and Je veux vivre from Romeo et Juliette. 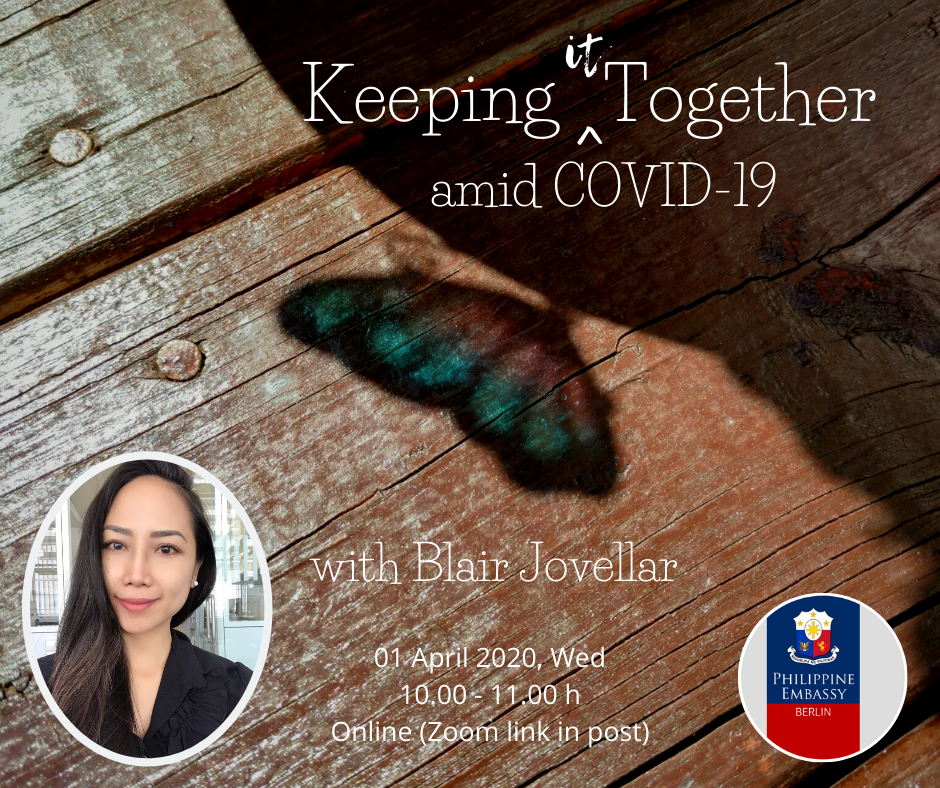 “Keeping it Together amid COVID-19” – the fourth session, focused on cultivating mental health and well-being during the pandemic. The session was presented by Ms Blair Jovellar, a neuroscience PhD candidate at the Hertie Institute for Clinical Brain Research, University of Tübingen. In addition to neuroscience research, her background includes working with clinical populations in mental institutions and Masters degrees in Psychiatric Nursing, as well as, neuroscience. She offered concrete tips, informed by her own experience, on how people can not merely cope with, but thrive amid, quarantine. 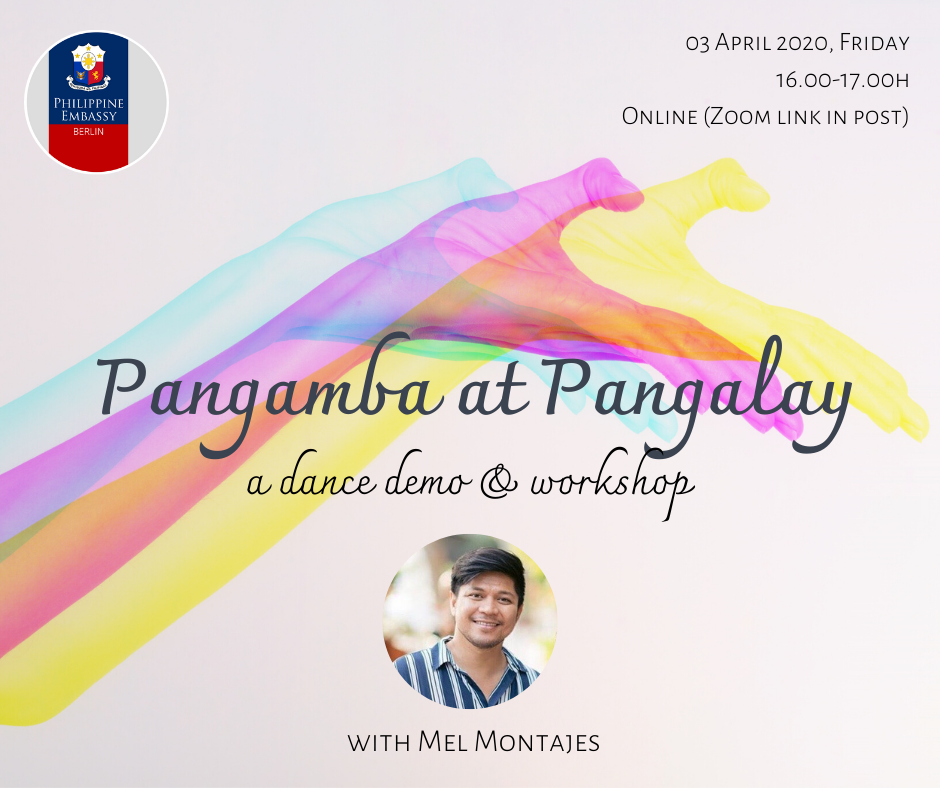 Dance as therapy was the premise of the fifth session, entitled “Pangamba at Pangalay.” Berlin-based makeup artist, videographer, and former dance troupe member Mel Michael Montajes led the demonstration and workshop focusing on the Sulu folk dance Pangalay. He gave an introduction about the origin and significance of the dance, before leading the participants in a warm up and instructing them on the choreography of Pangalay. As a bonus, the session also included a tutorial on the Tala dance challenge, which became viral in the Philippines in recent months. 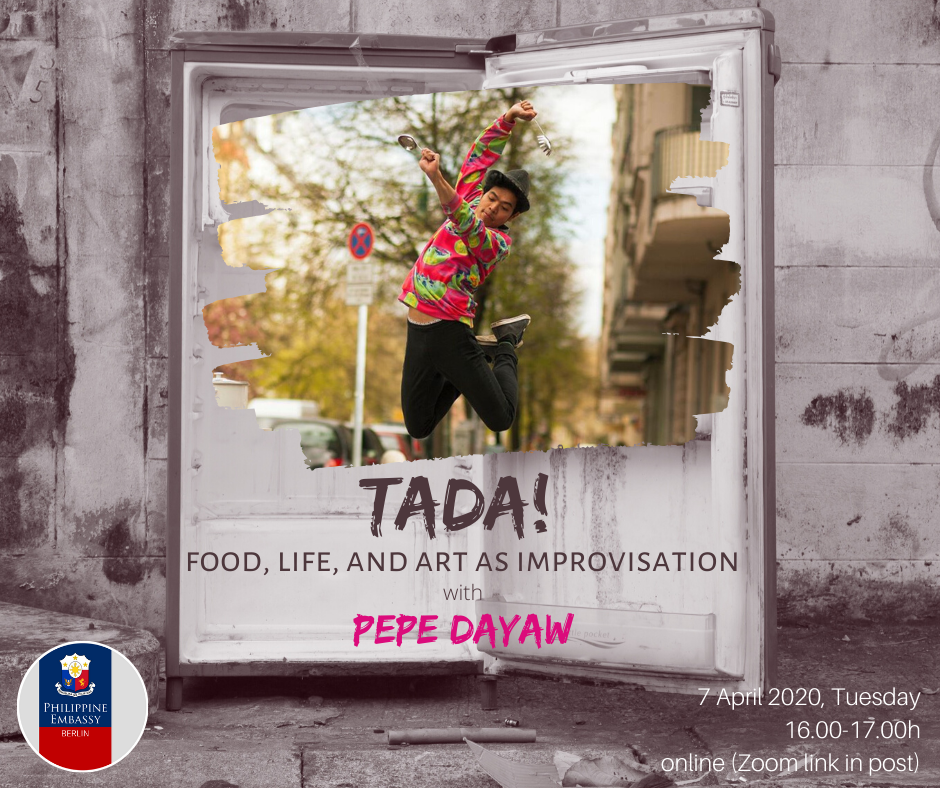 Performance was also at the heart of the penultimate session with Berlin-based Filipino artist Pepe Dayaw. “TADA! Food, Life, and Art as Improvisation” was a conversation cum performance revolving around the concept of ‘Tada,’ a Bikol word similar to the Tagalog ’tira,’ which means ‘leftovers,’ or the act of ‘leaving something for others.’ Pepe, whose mother is from Catanduanes, places this idea at the heart of his cooking and performance art. The concept became the starting point of a discussion on improvisation in the kitchen, and how the kitchen can be “a theater with a thousand acts” as well as a place where community can be created and nurtured. 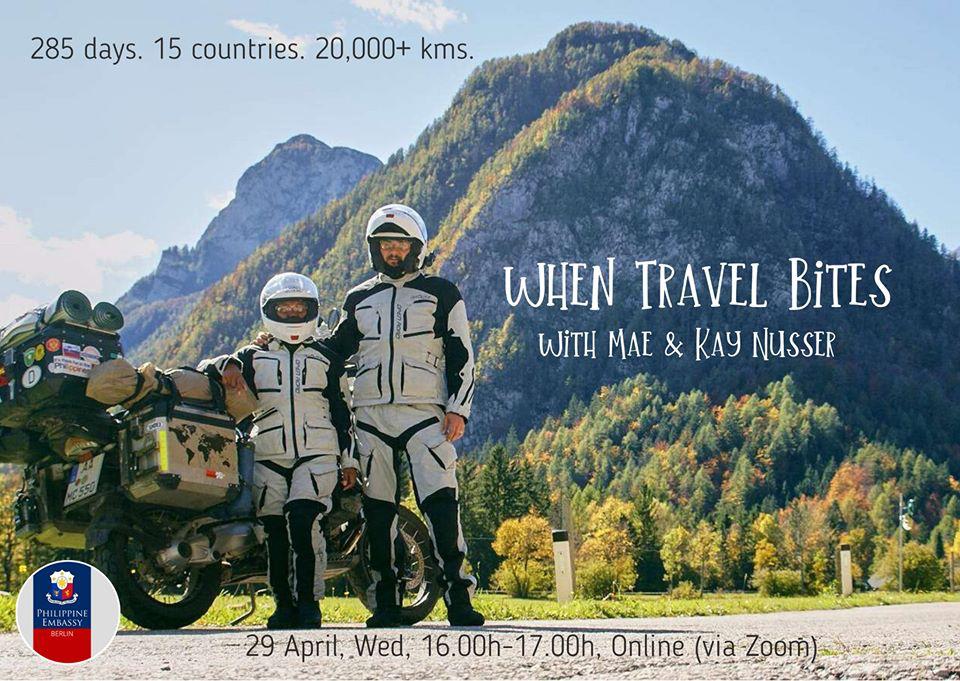 The latest session, “When Travel Bites” was a conversation with Mae and Kay Nusser, a Filipino-German couple who set out in June 2019 for a round-the-world journey on motorcycle. They made it to 15 countries from Germany to the UAE, across 20,000-plus kilometers, over 285 days, before COVID-19 cut their plans short, not only because countries were closing their borders, but also because Mae has health conditions that make her vulnerable to the virus. The couple shared their adventures, which are also chronicled in their blog whentravelbites.de.

The seven Bahaynihan sessions have collectively attracted thousands of views on the Embassy’s facebook page.

“The online innovations, such as the Bahaynihan series, we are introducing for our community members and networks will hopefully contribute to a greater sense of purpose and energy as we face challenging times ahead”, according to Ambassador Theresa Dizon-De Vega END.