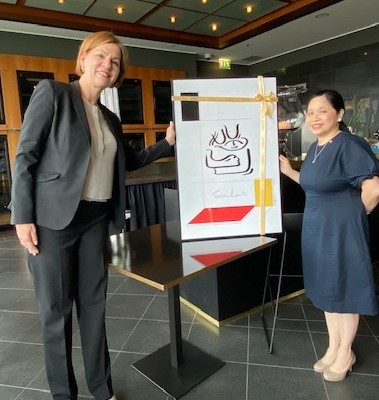 Philippine Ambassador Theresa Dizon-de Vega presented a digital artwork to German Federal Foreign Office Director General for Asia and Pacific Affairs, Ambassador Petra Sigmund, as a token of friendship on the celebration of the 30th Anniversary of Germany’s Reunification.

The artwork, created by Filipino artist Nityalila Saulo, features the German word, “Einheit” or unity, written in the indigenous Filipino script of Baybayin.

The central message of the piece is that no wall can divide the human spirit.

The blocks represent the remnants of the fallen Berlin wall, and a window for those who witnessed the struggles of division and oppression. The Baybayin characters of Einheit (Aynhayt) come together to form an embrace, which represents the humility of clashing ideologies, the reunification of separated families, and the pivotal moment when the fall of the wall became a symbol of hope and unity.

The overall look is inspired by the Bauhaus art style which originated in Germany. This modern art movement is a unique aesthetic that combines fine art and design. END