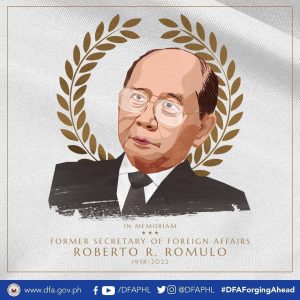 The Philippine Embassy in Germany condoles with the family of former DFA Secretary Roberto R. Romulo who passed away last 23 January.

Secretary Romulo served as Ambassador to Belgium, Luxembourg, and the European Union Institutions (1989- 1992), and later as Secretary of Foreign Affairs (1992 – 1995).

With these and numerous other accomplishments, he will be fondly recalled by the women and men of the Department of Foreign Affairs as a statesman that upheld the ideals of excellence in the conduct of diplomacy.

You may send your condolences through the e-condolence book: https://tinyurl.com/eCondolenceRRR