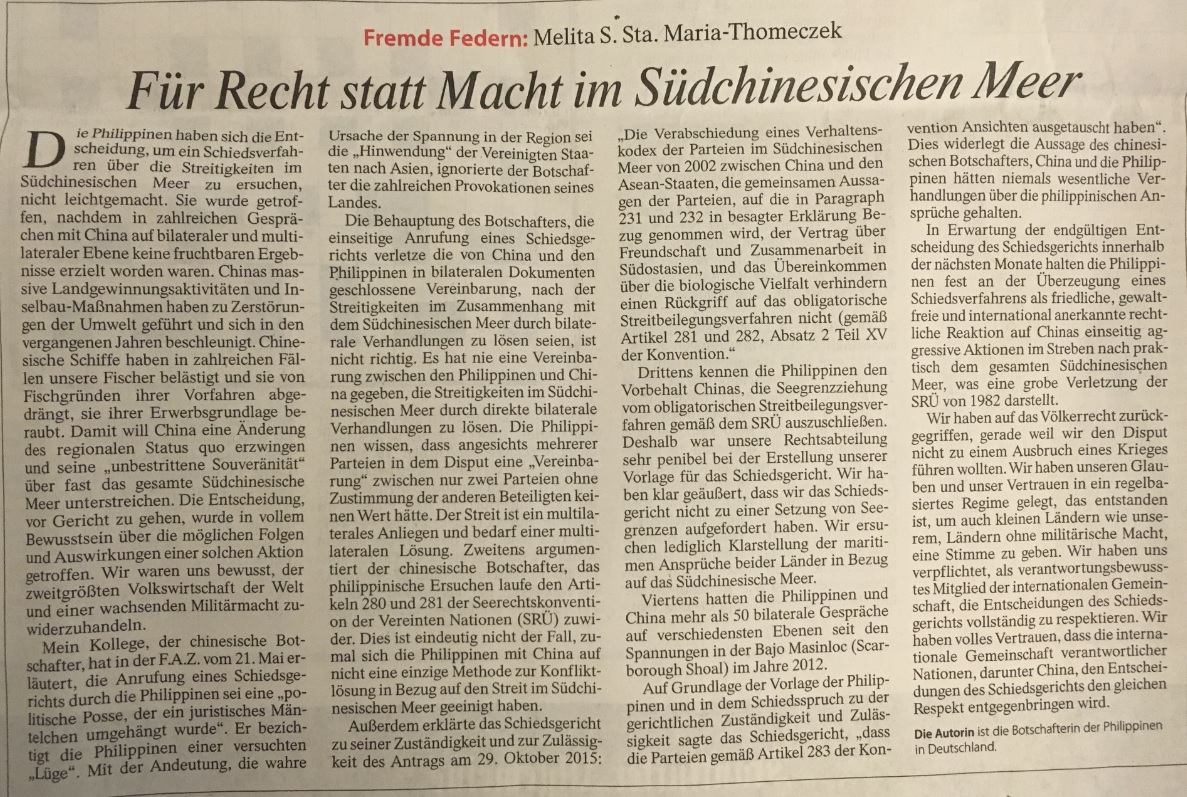 For Right instead of Might in the South China Sea

The Philippines did not take the decision to go to arbitration lightly. The decision was taken after numerous dialogues with China at the bilateral and multilateral level did not yield fruitful results. China’s massive land-reclamation and island construction activities have led to the destruction of the marine environment and accelerated over the past few years. In many instances Chinese maritime vessels have harassed our fishing vessels and drove them away from the fishing grounds of their ancestors, depriving them of their means of livelihood. Therewith, China wants to enforce a change in the regional status quo, underlining its “undisputed sovereignty” over nearly the entire South China Sea. The decision to go to court was taken fully cognizant of the possible consequences and repercussions such an action would take. We were aware of the prospect of going against the second largest economy in the world and a rising military power.

My colleague, the Chinese Ambassador, expressed in an opinion piece in the Frankfurter Allgemeine Zeitung (FAZ) last 21st May that the arbitration case brought by the Philippines against China was a “political farce, disguised with a tiny judicial cloak.”  It labeled the Philippines as trying to “lie”. Insinuating that the US “Pivot to Asia” was the true cause of the increased tension within the region the Ambassador ignored the numerous provocative moves his own country has made.

The Chinese Ambassador’s assertion that “the unilateral appeal of an arbitration tribunal violates the agreement between China and the Philippines that was already concluded in bilateral documents and which states that bilateral negotiations are to solve disputes in connection with the South China Sea” is not true. There has never been any agreement between the Philippines and China to resolve the dispute in the South China Sea through direct bilateral negotiation. The Philippines is fully aware that there being multiple claimants/parties in the dispute, no “agreement” reached between two parties would hold water without the participation and consent of the other parties involved in the dispute. The dispute is a multilateral concern and needs a multilateral solution. Second, the Chinese Ambassador argued that the Philippine decision to seek arbitration went against Articles 280 and 281 of UNCLOS. This is clearly not the case as the Philippines has not agreed with China to limit itself to any single method of conflict resolution with respect to the dispute in the South China Sea.

Furthermore, the Arbitral Tribunal itself stated, in its Award on Jurisdiction and Admissibility, that “the 2002 China–ASEAN Declaration on Conduct of the Parties in the South China Sea, the joint statements of the Parties referred to in paragraphs 231 to 232 of this Award, the Treaty of Amity and Cooperation in Southeast Asia, and the Convention on Biological Diversity, do not preclude recourse to the compulsory dispute settlement procedures (according to Articles 281 or 282, Section 2 of Part XV of the Convention).”

Third, the Philippines is fully aware of the reservations China has made with respect to the exclusion of maritime boundary delimitations from its acceptance of compulsory dispute settlement procedures under UNCLOS. This is why our legal team has been very careful in crafting our submissions before the Arbitral Tribunal. We have clearly stated that we are not asking the Tribunal to delimit any maritime boundaries. We are only seeking clarifications on the maritime entitlements of the two countries with respect to the South China Sea.

Fourth, the Philippines and China have had more than 50 bilateral talks at various levels since the 2012 stand-off in the Bajo Masinloc (Scarborough Shoal).

The Arbitral Tribunal, based on the submissions presented by the Philippines, and making an award on jurisdiction and admissibility, found “that the Parties have exchanged views as required by Article 283 of the Convention”.  This belies the Chinese Ambassador’s statement that China and the Philippines never held substantial negotiations on the claims made by the Philippines.

Awaiting the final ruling of the Arbitral Tribunal of the Permanent Court of Arbitration within the next few months, the Philippines maintains its belief that arbitration is a peaceful, non-violent, and internationally acceptable legal recourse in response to China’s unilaterally aggressive actions in pursuit of its excessive claim over virtually the whole of the South China Sea, which is in gross violation of the 1982 UNCLOS.

We have sought recourse to international law precisely because we did not want the dispute to lead to an outbreak of war. We have placed our faith and our confidence in a rules-based regime that was designed to give voice to even small countries like ours with no military might. We have committed, as a responsible member of the international community, to fully respect the ruling of the Arbitral Tribunal. We have every confidence that the international community of responsible nations, including China, will have the same respect for any decision reached by the Tribunal.

The author is the Philippine Ambassador to Germany.