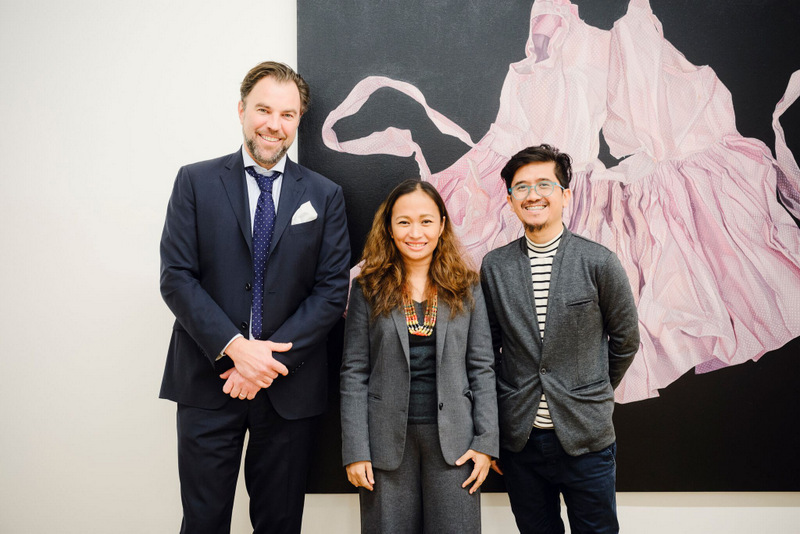 Filipino visual artist Marina Cruz is flanked by her husband, fellow artist Mr. Rodel Tapaya (right) who has his own exhibition at Galerie Stadt Sindelfingen in Stuttgart and gallery-owner Mr. Matthias Arndt

Marina Cruz flew to Berlin (from her Bulacan studio) to be at the opening of her exhibit “Mend and Amends” at the Arndt Art Agency in Fassanenstrasse, Berlin.  The exhibit presented the artist´s new body of work in the form of six medium to large-scale oil on canvas paintings with striking realist technique through the articulation of precise brushstrokes and detailing. Cruz completed a Bachelor of Fine Arts at the University of the Philippines College of Fine Arts and is a recipient of the prestigious Filipino art prize the Ateneo Art Award in 2008. 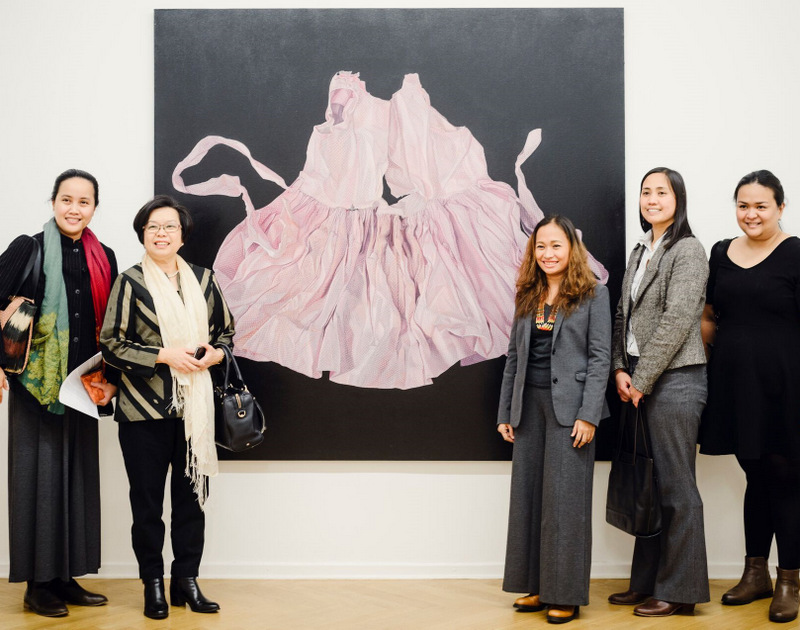 The featured artist with Ambassador Melita Sta. Maria-Thomeczek and other Officers of the Embassy

With the dress as the central theme of her exhibit, the artist cited the influence of Classical painters Rembrandt and Rubens who served as inspiration during her formative years at art school. Her works were concerned with the interplay between the formal realist qualities of painterly depiction and that of the intangible connection of the life of the invisible wearer.

Known for her interest in exploring ideas concerning fragility, imperfection, beauty, authenticity and memory, this preoccupation with clothing was inadvertently triggered when discovering a range of family heirlooms. Cruz elaborated:  “This exhibition is a continuation of my artistic practice on looking closely at the use of fabric as a surface and symbol of a person. I carefully observe the relationships of fabric and skin, as object and subject, its forms and textures, sensual and beautiful amidst imperfections and flaws. This fascination with textiles began fifteen years ago. At that time I was looking at various materials, blankets and clothing, and found my mother and siblings’ baptismal dresses. It was a pivotal moment. I observed that the garments and babies’ dresses were so beautiful, yet damaged. They became brittle over time. I began utilizing the dresses as a subject matter, and in the process I was able to learn about my family history.” 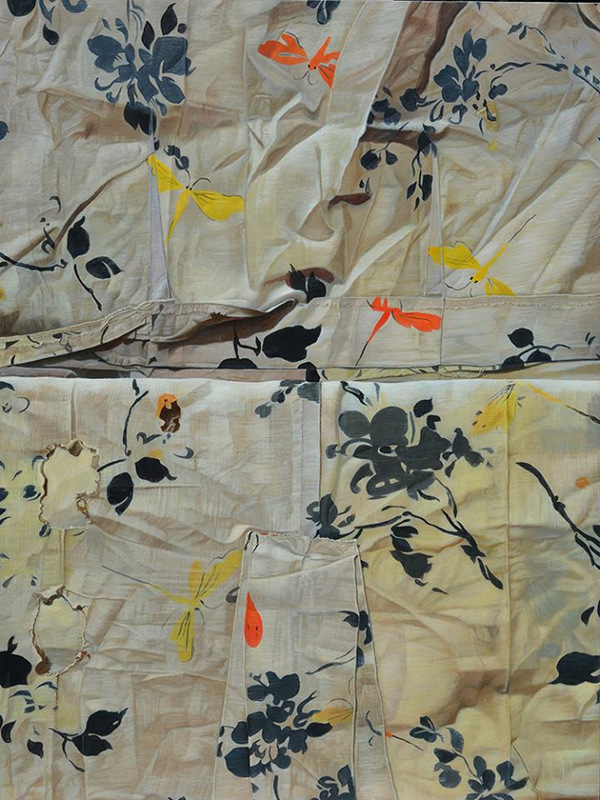 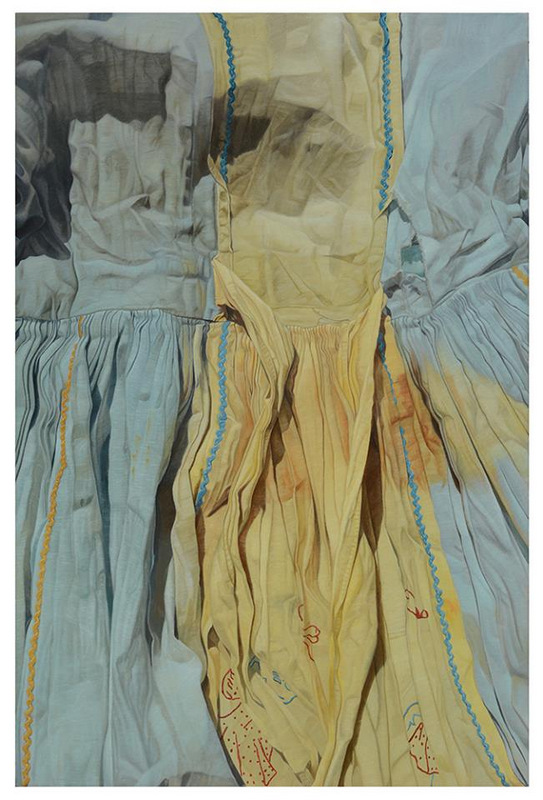 In the same evening, Berlin-based artist Lizza May David opened her solo exhibit “Mangrove” across town at the Michael Janssen Gallery in Potsdamerstrasse, Berlin.  Her paintings reflected her contextual artistic disposition, confronting formalism and abstraction. She had said that she understood the canvas as “sensorium for social change within specific localities, looking at the paintings’ materiality, sensuality, proximity and questions of non-representation through processual painting practice.” Seeing the canvas as a subject, like in her documentary films, she followed the image wherever it took her.

During the exhibit, David also launched her book “The Canvass and the Monkey.” 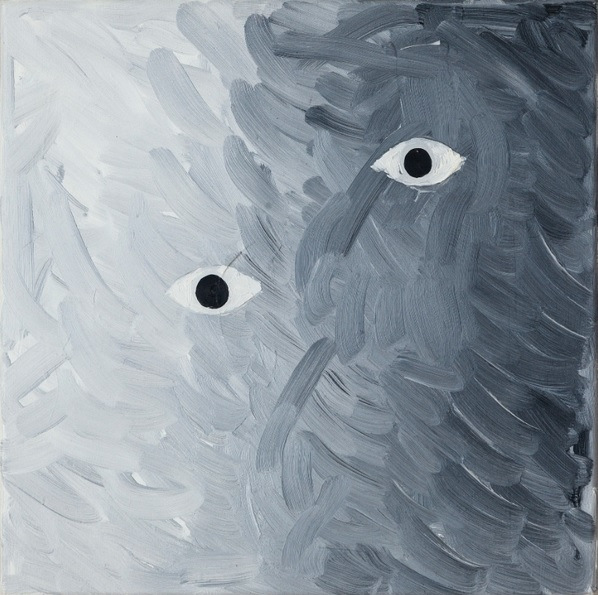 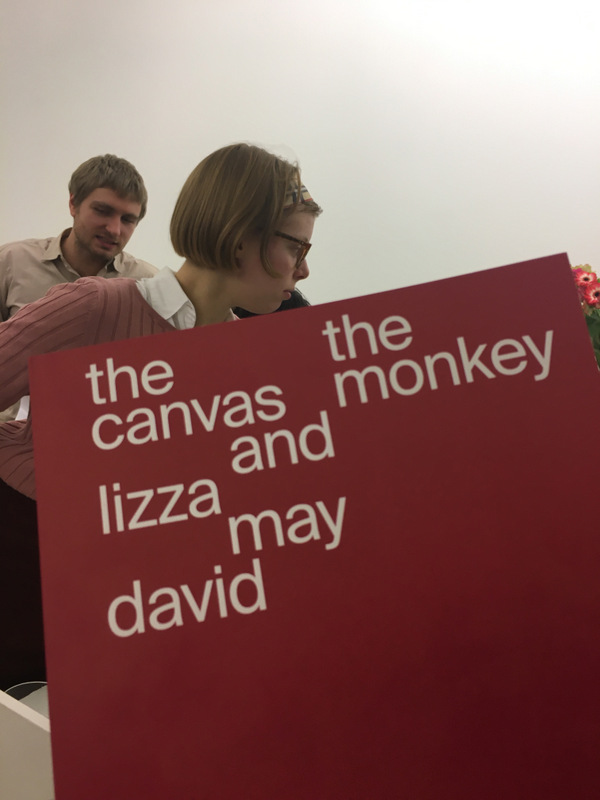 Ms. David also launched her book “The Canvass and the Monkey” at the vernissage

Inspired by her Filipino heritage the publication explored issues of memory, knowledge and loss in archives and in nature in the Philippines. This booked provided an insight into her current approach to painting within the context of her oeuvre over the last decade, accompanied by essays by Oona Lochner, Victoria Herrera, Anna-Lena Wenzel, among others.

Marina Cruz´s exhibit will run until March 2017 at the prestigious Arndt Art Agency in Charlottenburg while Lizza May David´s will be on show at the Michael Janssen Gallery in Mitte until January 2017.  The Arndt Art Agency specializes in Asian Art particularly Philippine and Indonesian art.  END