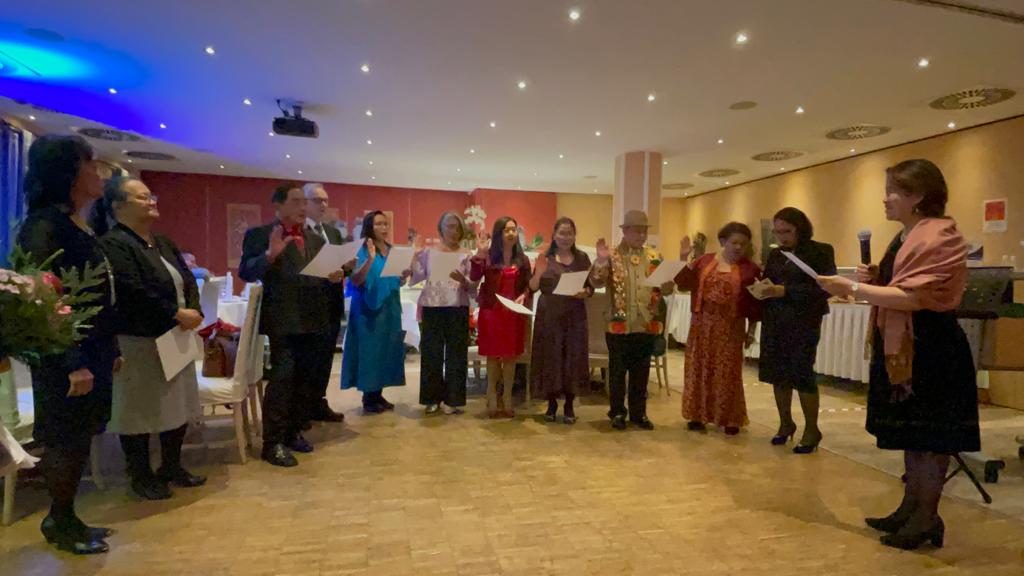 20 November 2021, Hamburg – The Hamburg-based Federation of Filipino Organizations in Northern Germany (FFONG e.V.) held the induction of its new officers and annual Christmas party on 20 November 2021. The Philippine Embassy’s Chargé d’affaires,a.i. Lillibeth V. Pono administered the oath to the officers of the Federation led by its incoming President, Ms. Corazon Entapa.

Dr. Resurreccion R. Repotente, M.D., one of the founders of the Federation, in her Welcoming Remarks recounted the history of the organization, including the objective of creating a forum of exchange through the FFONG after the closure of the Philippine Consulate in Hamburg in 2008. She encouraged the new officers to continue to harness the potential of each organization into a common force and continue to be a light to each other.

On the other hand, former FFONG President Ms. Divina Gracia-Martens underscored  that the Embassy has always been supportive of FFONG and able to troubleshoot problems and address the concerns of Filipinos, especially  the undocumented ones.

Ms. Corazon Entapa, in her acceptance speech as FFONG President  emphasized the need for Bayanihan and  cooperation.  She appealed  to the members of  the Federation to continue upholding their mission and organizational objectives.

Ms.  Pono  conveyed  to the newly-inducted officers that they are  leaders,  with assumed responsibilities,  to advance the welfare of their communities.   She  assured the FFONG that despite the closure of the Philippine Consulate in Hamburg, the Embassy will always be a partner of the Federation, as it has always been, in promoting the interests Filipinos and Filipino-Germans in northern Germany.

The Federation was established in 18 April 2010 in the wake of the closure of the Philippine Consulate General in Hamburg and is a registered organization (eingetragener Verein e.V.) under local German laws. Its membership includes 17 Filipino community organizations from the States of Hamburg, Kiel, Schleswig-Holstein and Lower Saxony. There are around 5,000 Filipino-Germans in the Northern German area. (END)