Award-winning Filipino writer Gina Apostol conducted a writing workshop at the Philippine Embassy in Berlin as part of the embassy’s Gender and Development (GAD) program, in coordination with the Philippine Studies Series Berlin. The workshop, entitled “Perspectives and Narration in Migration: Writing narratives about the self, work, and foreignness through the eyes of others,” was attended by 12 participants from diverse backgrounds. 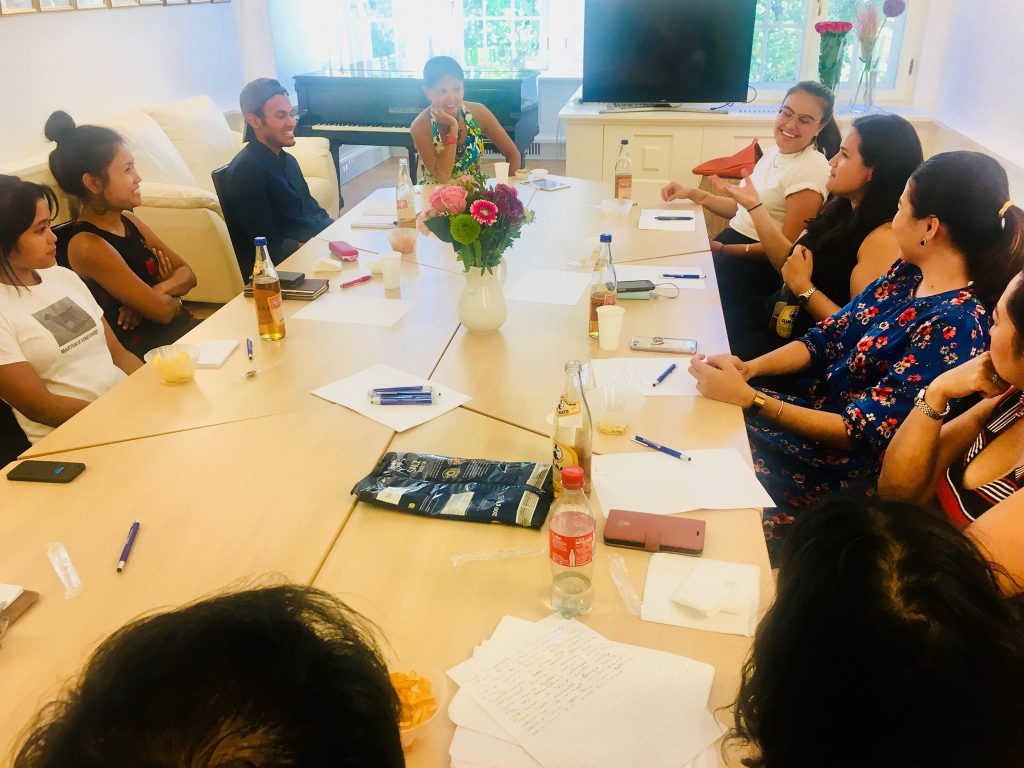 The workshop participants listen as someone responds to a writing prompt given by Ms. Apostol.

Ms. Apostol, who teaches English at Fieldston School in New York and whose third book, Gun Dealers’ Daughter, won the 2013 PEN/Open Book Award, led the participants through several writing and storytelling exercises. In the first activity, she challenged them to share an emblematic story about themselves with a partner, and then narrate their partner’s story in the first person. In another activity, she asked them to write a short piece of prose fiction about “an Other,” which they then had to rework from the perspective of another character in the original narrative.

The exercises elicited a range of insights from the participants. In response to having their stories told by another person, some admitted feeling tense about how faithful the other person would be to their account while others were fascinated to hear their tales embellished by their partner.

Meanwhile, the exercise on writing about an Other brought to the surface participants’ thoughts and feelings about themselves being “othered,” whether because of their ethnicity or gender, or other aspects of their identity. One of the participants observed that such ‘othering’ could in fact take place within a group such as overseas Filipino communities, where hierarchies tend to form.

“Indeed, you might both be migrants, but how shared is your story? It’s the point at which stories merge across hierarchies that’s interesting,” Ms. Apostol said. She also underscored the need for empathy when a writer “occupies” another character.

Ms. Apostol’s fourth novel, Insurrecto, is due to be released in the Philippines and the United States in November. (end)