The Province of Tarlac has once again re-invented itself not just as a major agricultural center but additionally, as an emerging hub for Lifestyle Design and Artisanal products. This month, Tarlac and its designers and artisans took center stage at the Ambiente Lifestyle Design Fair held in Messe Frankfurt, Germany from 07-11 February 2020. Tarlac was introduced as the first Partner Artisan Community of CITEM-DTI for this year’s Philippine Ambiente participation. Eight companies from the ... END_OF_DOCUMENT_TOKEN_TO_BE_REPLACED

The Philippine Embassy and the Philippine Trade and Investment Center (PTIC) took part in the Annual Reception of the German Federal Association of Small and Medium Enterprises (BVMW) on 27 January 2020 at the Maritim Hotel, Berlin. The BVMW held several sub-events including an Economic and Networking Forum held before the Association’s Plenary Session. The Philippines, through the PTIC led by Commercial Counselor Althea Antonio, provided information about investment sectors in the Philippines ... END_OF_DOCUMENT_TOKEN_TO_BE_REPLACED

DTI’s Undersecretary for the Industry Development and Trade Policy Group Ceferino S. Rodolfo visited Berlin and Nuremberg on 23-24 September 2019 for a series of engagements with German industry. Usec Rodolfo was accompanied by Director Evariste Cagatan of the Board of Investments (BOI), OIC Lanie Dormiendo of BOI’s International Investments Promotion Service (IIPS), Mr Steve Recto of BOI’s Industry Group, and Mr Mykell Jizen Reyes of BOI-IIPS. His program was organized by PTIC-Berlin, headed by ... END_OF_DOCUMENT_TOKEN_TO_BE_REPLACED 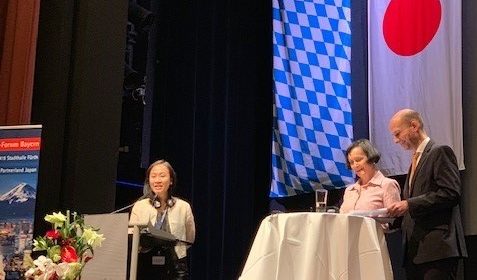 Investing in the Philippines and in New Clark City was pitched by the Philippine Delegation to the Asia Pacific Forum Bayern (APF) held at the Stadthalle Furth in Nuremberg from 9-10 July 2019. The Philippines was featured in the Asian Hotspots Panel with two panelists Bases Conversion Development Authority (BCDA) Vice President for Investment Promotions Atty. Joanna Capones and Dr. Martin Henkelmann, Executive Director of the German-Philippines Chamber of Commerce and Industry (GPCCI). Dr. ... END_OF_DOCUMENT_TOKEN_TO_BE_REPLACED